“Not that different from a modern chimp, capable of sounds signifying pleasure or warning,” Bone’s evolution of the singing voice was a tool for servicing relationships in larger groups, promoting calmness and understanding and perhaps not dissimilar to the purring of a cat.

“The Voices in my Head!”

Like most guitarist, Bon learned to play the guitar to impress the girls. Turns out even that couldn’t overcome his really bad personality. He is believed to be one of the most sought after musicians in the area due to the fact that he owes a lot of people money.

Offer to buy him a shot of bourbon and you to, can have the honor of being his number one best friend!

Phred was found thumping on a knacker in the alley for knicking his dole money. When we saw him we said, “Heya Bones, why don’t you thump on a washtub bass instead of that poor sod?”

Phred, being no shaper, said “I’m not going to make no scene with that single string racket-maker. Give me four strings and I’ll show you how to crack the concrete.” After some convincing, and a round of Dewar’s, he agreed to join the band.

Gawtellpuss, now we can’t get rid of him. Here’s to our sanity and our good name.

Skeleton Keys was born in the back woods of Maryland where he had to cut wood just to eat. Because of that, he grew to have hands that could span 13 piano keys! People came from miles around just to see his very large extremities. He was taught to play keyboards by friendly townsfolk.

But, because the local town made it illegal to harm any tree or songbird within the town limits, Skeleton Keys had to take his craft to the road. Some felt it best he go as far away as “that there Ohio waterway”. Determined to make the most of his talents and physical attributes, he searched for a group of musicians to join with and instead, found Counting Skeletons. (This town will never be the same).

“Of course I transposed back!” 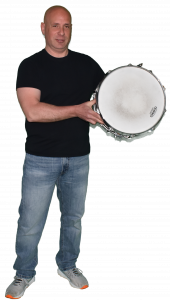 Raised on the farm, this guy is not afraid to dig in and get dirty. Like a good combine cutting the grooves, he’ll get your toes tapping and your feet moving  on the dance floor.

But don’t think his beat stops there; Jon Bone-m is a master of debate, as well. Trained to read between the lines and decipher the small print, he can find a rhythm that causes the most stoic magistrate to dance and weave.

We didn’t even try to keep him out of the band; it wouldn’t hold up in court.

“Hey judge, if you’re going to bang that gavel, do it on the two and four!”

Starting out as a Paranormal Ghost Chaser, Dead Ear needed to buy a lot of weird technology. Not getting a lot of calls for using that technology he thought he’d search for dead soul on his own. What better place to look for the walking dead then a rock band?!

“I did not have the bubbles on for the whole show”